I don’t know what it is about Pictou Lodge weddings but here I am again posting a story about a turning point in a wedding. The last time something like this happened it was Emily and Chris and some torrential rain that caused a ceremony to happen inside instead of outside. Emily put that minor detail behind her and they threw down one of the greatest wedding parties I’ve ever seen at the Lodge. From a photographer’s point of view, its amazing to watch this happen. To see the disappointment creep in, only to be kicked in the ass and sent packing. There will always be logistical pains in the ass at every wedding…it’s how you deal with them that can really make or break the wedding.

We knew these guys from a previous wedding so in our heads, this was going to be one of those late nights with everyone dancing on the ceiling. We arrived in New Glasgow to shoot the girls and everything was going smoothly. Miriam, a self confessed control freak (and I mean freak in the most loving way) was frantically peck, peck, pecking away at her blackberry about the logistics of the day ahead for a few hours and when the girls arrived at the lodge to get ready someone made the comment that, “this was the most sober they had all been at this point in any wedding they’d ever been a part of”. This was about to change.

Everything went off as planned and there was very little stress but you could tell that in the back of Miriam’s mind she just wanted to have everything unroll as it should and get to the party. The ceremony was beautiful and the sun beat down on about 150 guests on the cliff overlooking the Northumberland Straight. Photos were fun, dinner and drinks were broken up by hilarious speeches and tears, lots of tears. The bottles of wine on the head table were nearing the bottom as the dinner wrapped up and we stole Miriam and Chris away for 20 minutes for a few sunset photos.

That’s when it all happened.

“Let’s go in the canoe” said Miriam with a giggle. “Oh hell yes” I replied.

We wandered over to the dock, swatting away the copious amount of flies that were sure to cut this shoot short. Miriam leaned over to get into the canoe in the dark and Chris followed with a swagger infused with a small bit of hesitation. 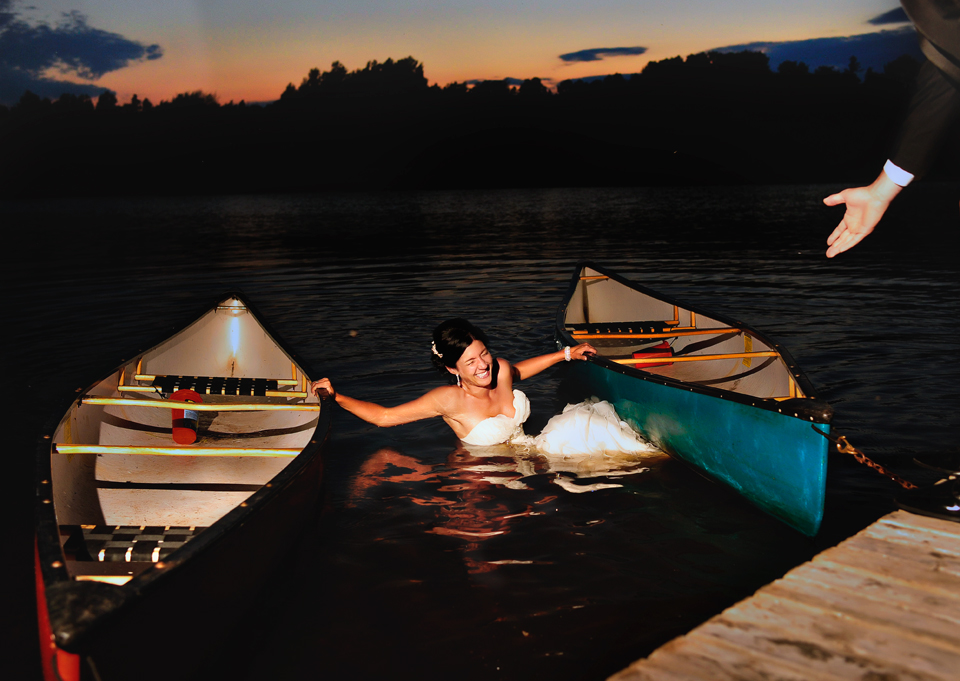 It happened that fast. Miriam was in the water between two canoes and for a split second I thought, “Help her”. That’s when the photographer in both Steph and I kicked in and Steph flung the flash from her side like she was in a 10 man gunfight. I threw up the camera and pressed the botton and hoped, prayed, begged and pleaded that this exposure was right because there was no time for adjustments. This was a moment. This was the turning point.

So while most brides would probably lose their minds over falling into 4 feet of mud and water, Miriam did not. So…we kept shooting and poor Chris bent over to help her out, saying something along the lines of, “Oh no. Oh no, Oh no”. All we could see was Miriam from the waist up. the rest of her very expensive gown was hidden below the surface of mud and water but what shocked us the most was the contagious laughter echoing over the lake. “It’s ok. It’s fine. Don’t worry about it. I’m ok” she kept telling Chris as he plucked her from the water. (we kept shooting)

As we walked up the stairs that lead away from the lake and headed back to the Lodge for the first dance, I heard the greatest words ever spoken by a bride. Slopping her way up the stairs in what was probably a 50 pound dress at this point, Miriam says, “Fuck it. I’ve been stressed out all day long and I want to have fun. I’m not going to let this ruin our day. Let’s go party.” 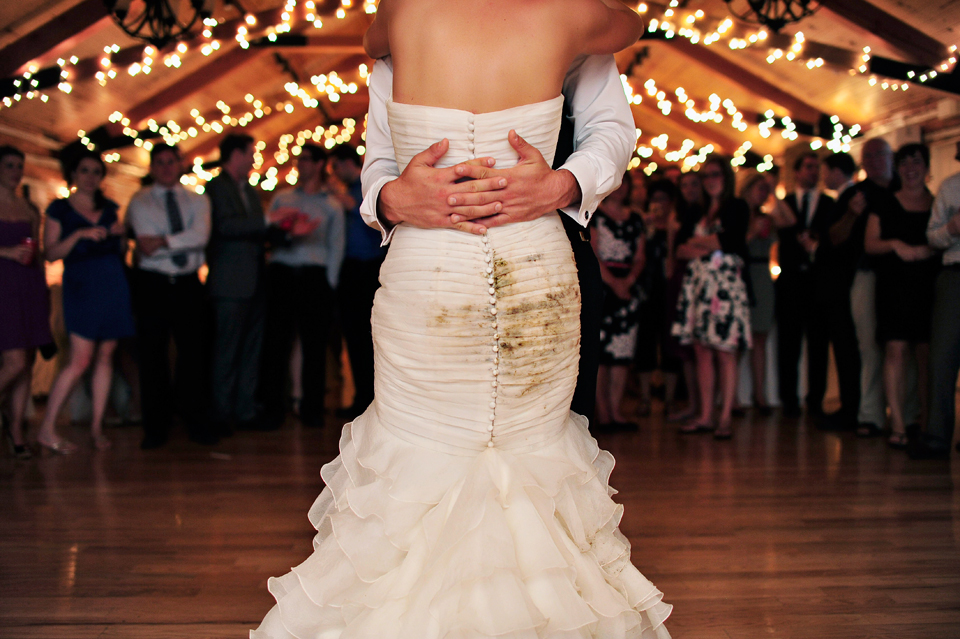 And party they did. They danced on tables, they removed articles of clothing, they broke bottles and danced and sang all night long. At 4am that morning I put myself to bed on a pullout couch in Meaghan and Justin’s cabin as they played guitar, ate pizza and made puppets w over mitts around me.

This, my friends, is how you celebrate a wedding. The little details are just that. Little. Weddings are a gathering of friends and family and when these little details fall out of place the best thing you can do is heed the words of Miriam Denise Watts and just say “Fuck it”.

(dear parents and grandparents, I’m sorry for the cussing!)
(dear staff of the Pictou Lodge, you are incredible! thank you for opening the pool at 2am and your high level of tolerance for chaos and good times)

Oh my god. I don’t know these people but this is a GREAT story – it made me weepy! I hope they can manage all of life’s up and downs with this sense of humor and perspective and wish them a lifetime of happiness. Thanks for sharing!! Awesome.

I love your blogs!! You have a great way to tell us what happened, make us feel like we were a part of the couples’ special day… I told so many people about Emily and Chris and “The Last Look of Disapointment”… I got all choked up reading the story and the pictures were out of this world!! Again this time, your words and your pictures meshed beautifully together. And thanks to you, and Steph and the Bride being so awesome, the moment was capture perfectly. I couldn’t help giggling… the “oh no” giggles… If you know what I mean

I totally admire your guys’ work… it’s unreal… like I told you at Jana and Jeremy Simms wedding, behind a pillar in the hotel lobby… I can’t afford you right now, nor for my wedding… but mark my words!… I will be able to afford you for something… someday! 🙂

Thank you for the afternoon giggle! Keep up the AWESOME work!

It was an amazing family wedding and I love how you captured every moment perfectly…the picture of chris scratching his head is awesome!!well they all are, you did a great job!!! 🙂

This beautiful beautiful bride is even more beautiful because of the gigantic smile on her face as she tries to recover from falling in the water between the canoes….. If she approaches the rest of her life with this great attitude and beautiful smile, ohhhhhhh what a wonderful life she will have , full of people who want to be around her because of her great attitude. I don’t know her but sure wish I could see the rest or her photos especially the ones taken during the mishap LOL

Today I had a bride call me who is so stressed she is flipping her lid. After speaking with her for a few minutes and telling her like it is she calmed down. At the end of our conversation she said “That’s what I love about you…you can always make me feel better.” Best compliment I could ever get.

I basically told her to “f*@k it”. She would say her vows whether it rained or shined. Whether everything was perfect or not. When she comes in to see me today I’m going to let her see this wonderful couple and read your words.