Grant + Nicole got married at Muir Murray on Saturday and it was the first time we had shot there. It was also the first time we had met Grant + Nicole. We had just come off a Friday wedding in Cape Breton. We left Sydney at 1am, drove to Windsor and slept for 4 hours before heading to Muir Murray. Having kids, I’m use to lack of sleep so while we did have our wits about us, Grant and Nicole made this shoot very easy. ‘Laid back’ would be an understatement.

As it turns out, the majority of weddings find couples and their guests enjoying a drink and a speech as the sun slowly sets over the city/winery/ocean etc. We’ll often try and take advantage of this light anytime we can but at this point we just couldnt find Grant and Nicole. So I crept away in the grass and took to shooting some smokers. A small group of 4 that I just could not get a good shot of. I got a good shot of someone lighting a smoke but another person’s head would be hidden. I got someone pointing but it didnt make sense. I realized I looked strange, camera stalking these guys, mentally begging with them to all move into some position that would work. It didn’t and I gave up. I walked away and was going to tell Steph how pissed I was that I had a cool shot lined up but nothing happened.

All of a sudden two fiddlers emerged from behind the tent, walking toward me, headed for the driveway for one last tune. It was one of those moments Elizabeth Gilbert talks about. They just happen. Perfect timing and shit house luck. So while this may not seem like an ‘epic’ shot…when you’re there, wishing something would happen without any meddling…its a rush. 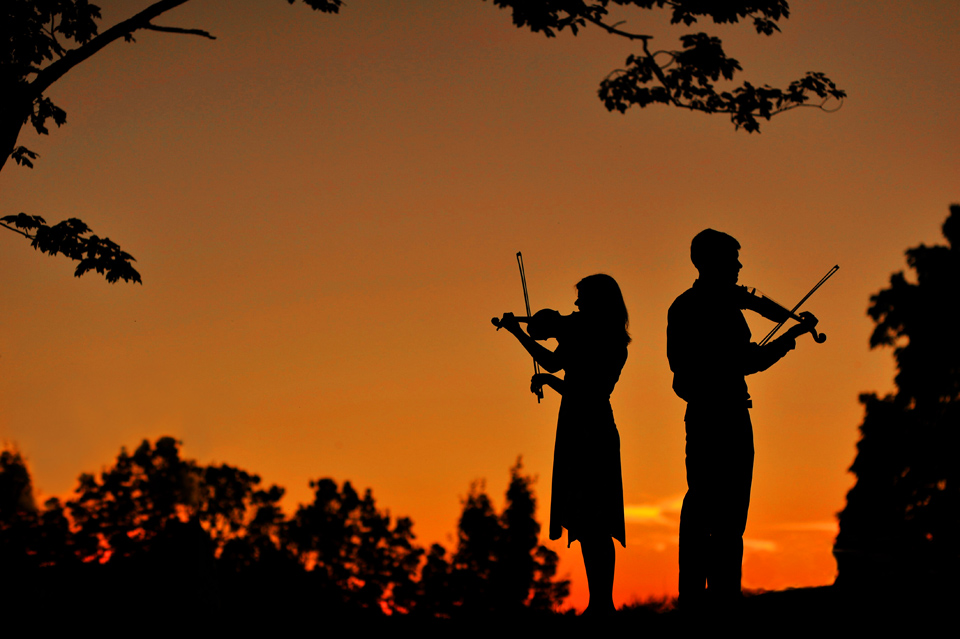 I’ve been pushing Steph to do more of her own shooting if she sees something. While she can sometimes be quite as a mouse, she’ll often have big ideas. This time she wanted to try something with the sun setting behind the trees and we just happened to find Grant and Nicole. She directed. I lit. Grant and Nicole muckled. This was what she got…

Gorgeous shots and I love the story that goes with them. I just recently came across your work through Fearless, and I have to say I’m in love with your images and your writing. Can’t wait to see/read more. 🙂