the man in the bullet proof vest

its been a while since i’ve had a story to tell you.  so here’s a good one.

met up w Geoff + Tara for an engagement shoot tonight around 6. they’re big lovers of traveling the world and go from the vines of the Grand Pre Winery to the soft sand beaches of Fiji.

so we headed out to the airport for a totally innocent shoot.

i just happened to have 2 vintage suitcases I just picked up on kijiji for$20. i met the lady who sold them to me at her house and when i went in, i just wanted to take everything. the suitcases were just cases to hold the rest of the coolness in that house. i was whisked away w my bags.

do you have any idea how many people go watch planes take off? a lot.  i can tell you exactly what they do while they watch planes take off. they engage in sexual activity. they smoke. they drink large Tim Horton’s coffee. (if you’re a sexually active, durex wearing, coffee drinking, Players light smoker…please pick up your garbage)

we headed for the new carpark at the airport. had a few laughs and as the sky got darker we headed for the roof. the elevator took us up, the automatic sliding doors let us out onto the roof. it was one big white gigantic concrete playground. the sun was setting and….then Tara went over on her heal and took a bit of a header. in her defense she had some killer heels. a lesser woman would have pulled the shoot and headed home. Not Tara. She had the tenacity of girl who’d been stung 5 times by hornets. She got up.

i set up a few flash and agreed we’d let Tara just stand in one spot since she was bleeding and had torn jeans…. i grabbed one test shot and got pretty close…and then i saw him.

out of the corner of my eye I saw the blue shade of authority coming our way….seeing as we were the only ones one the roof. this man is not happy. he’s perplexed as to how we could have gotten out there. This man does not have the kind demeanor of, say, a train yard authority. he’s terse w us.  i considered throwing down my camera and running like i did with the hornets but realized i surely would have been caught when i had to stop running and pay for parking to get out. so i stayed.

the situation calms a bit when we tell him what we’re doing. i show him some images….he tells me he’s got a Canon too! Common ground has been reached and the crisis has been avoided. then he tells us they saw (on the video I guess) Tara, who was 5 minutes ago laying on the ground, with Geoff and I standing over her. crazy.

i love this photo of him because he’s actually reading my business card.  i told him if his kids are getting married I’d take care of him. then he told me his daughter is 25 and has a boyfriend…and then he closed the elevator door on us.

freedom. (Geoff + Tara, thanks for the fun. Tara, I hope you are on the mend!)

stay tuned tomorrow for some news. its green and its all ours. 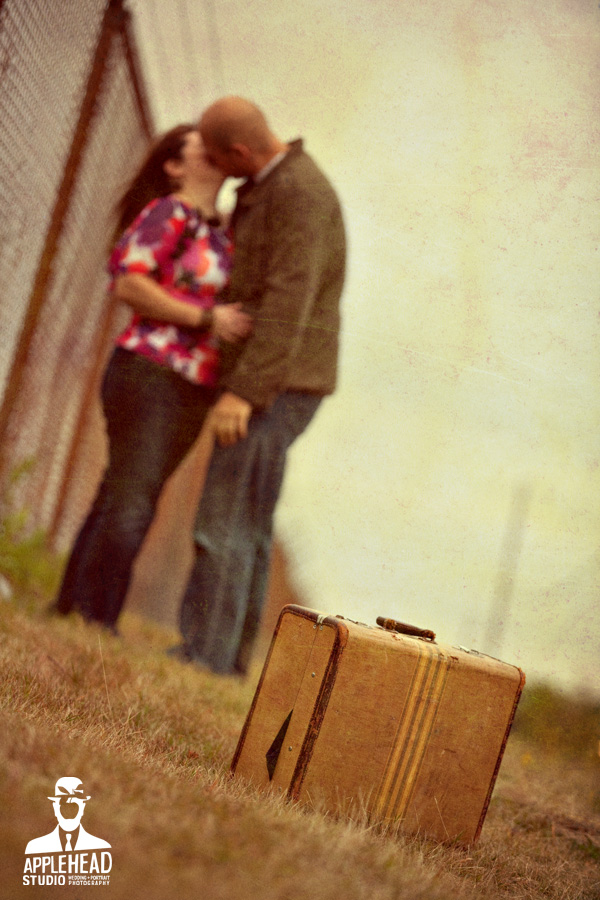 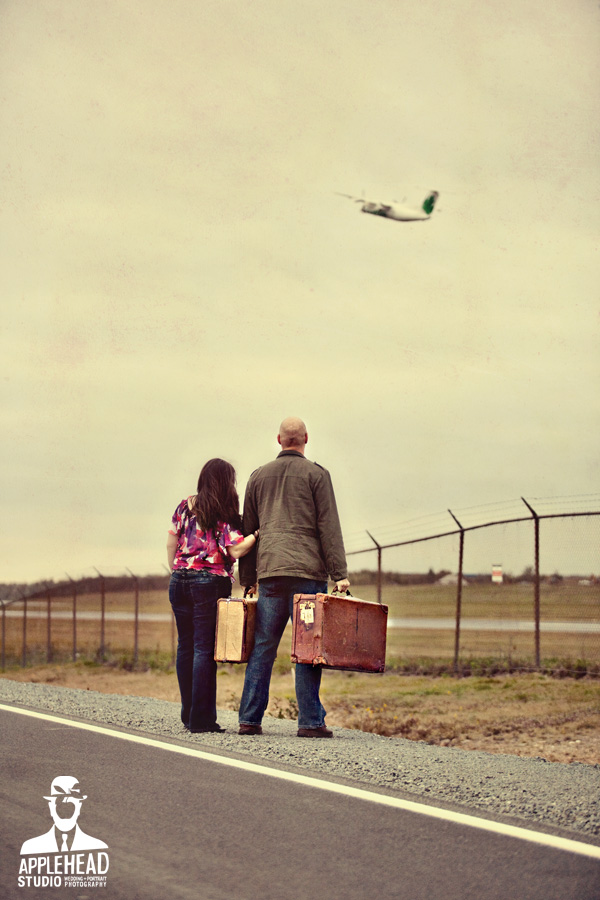 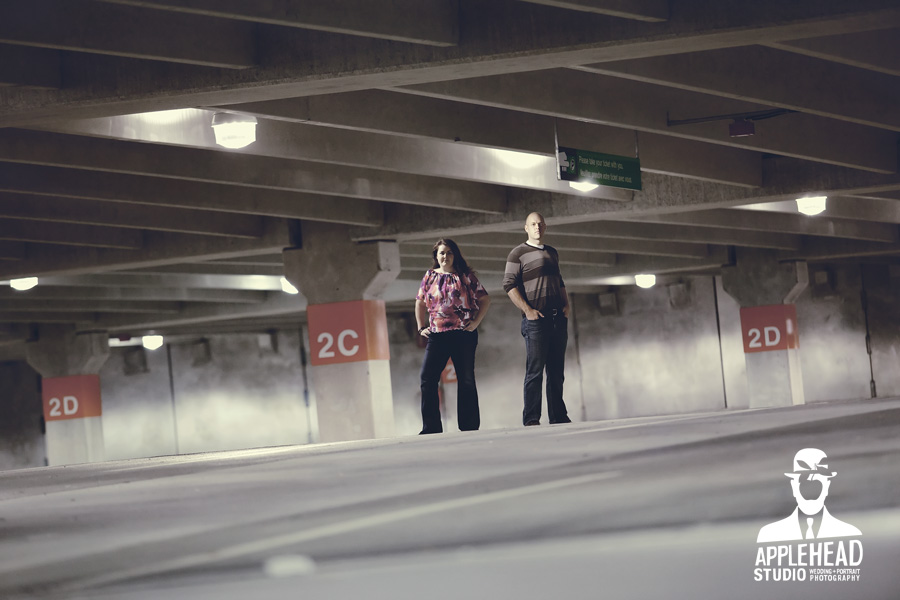 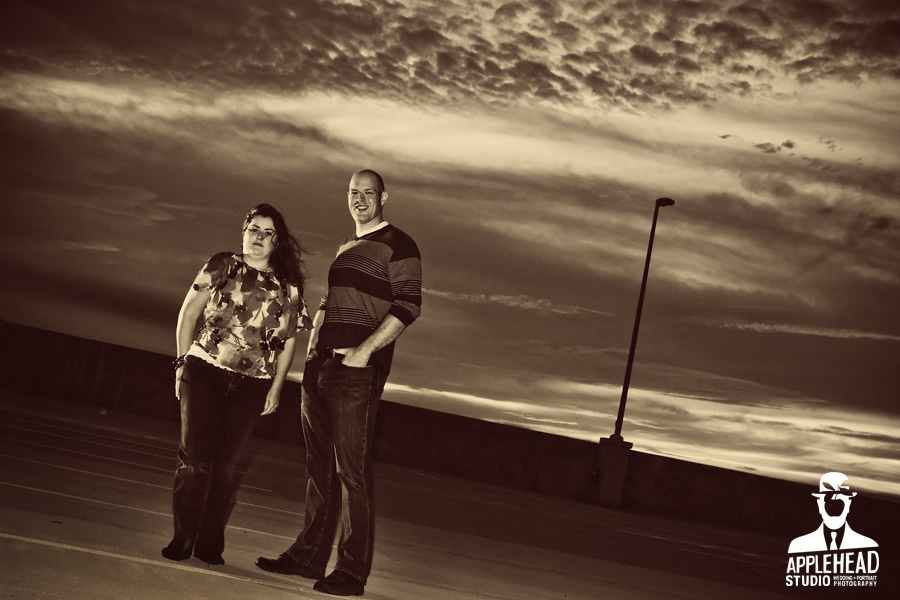 the above photo was a lucky test shot pointed in the right direction. the bottom photo is a man looking at my logo and thinking he’s seen it before, maybe in a craft store in Vermont. 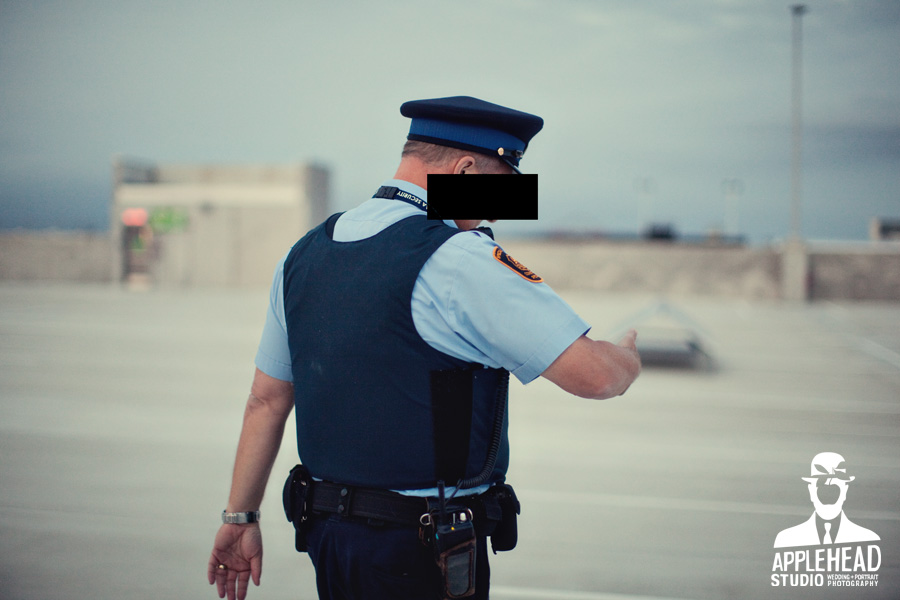 the story is even better with pictures!

OMG. I’m dying on so many levels. Having had the pleasure of dealing with the “train yard authority” and watching you schmooze, so I can just hear this whole scenario playing out.

Brian should work for the Airport Authority.

We both had a great time last night Liam, even with all of the drama that unfolded – and the pictures look amazing.

We just got back from the hospital and it turns out that Tara has a fractured bone in her foot and will be on crutches for a few days. It didn’t stop her last night, but I’ve always known that she was much tougher than I am. 😉