I had never intended to blog a family photo of us but this happened late this afternoon and we’re all still kind of walking around like we just got off the Gravitron. It was supposed to be so simple, and it started that way. Snacks were packed, naps were had and the sun was shining. We loaded one car with a wagon, Marse, Lola and Ruby. In my truck was 2 bags of camera gear, light stands, Eegn and Steph.

There’s a generous opportunity for some really awesome light in Point Pleasant Park but unfortunately there’s also a window of opportunity for complete afternoon harmony with Lola and Ruby. I opted for harmony vs good light.

We unloaded on Tower Road parking lot and thats pretty much where it started to go downhill. I ‘forgot’ Eegn’s leash and we were headed straight down the middle of the Park. So we’re lugging backpacks and light stands, a giant green wagon loaded with hilarity and songs as Marse looks at me and says, “And of course we’re the ones without the dog lease.”

A little behind the scenes story…we once did an engagement shoot out at Peggy’s Cove with some pyrotechnics and as soon as we set off the first firework, it scared the shit out of eegn and he took off. Gone. In the middle of a shoot my dog disappears. He eventually comes back but he was not pleased at all. Ever since that shoot eegn freaks out when he sees the lights come out. Its gotten so bad I just can’t take him with me anymore because he bolts.

So we get to the spot, unload, let the kids loose and start clicking for a decent backdrop. All of a sudden, Eegn is gone. Tail between his legs, head down and headed for Tower Road. We had no leash, so I took off my belt and tied him up to the giant green wagon we had rolled in with us. All was well and we found a spot but the sun was just not helping so we moved here and there all while the kids played on the hill and Eegn sat next to the wagon. Then we found a good spot and set up one flash, fired off a test shot and seconds later heard what sounded exactly like a dog dragging a giant green wagon behind it. Sure enough, eegn was leaving and he was taking the wagon with him. At this point we had not fired off a single shot of anyone and the wow factor of this play land was wearing off.

I drag the dog back and set him up nice and comfortable, next to the wagon and weighed down with gear and get back to shooting. At this point all I wanted was one shot of the four of us. The problem was that we needed some serious light and it had to be close. I brought a 5 foot PLM and profoto head. The umbrella clip on the profoto doesn’t hold much in a bit of wind (and no sandbags) so with the slightest breeze this thing was a parachute or harmful object. It’s tough for me to be in a family photo, light and shoot that same family photo and be a fun Dad at the same time. So we left it all up to Steph. She had to hold up a 5 foot umbrella 6 feet in the air and shoot the photo at the same time. It had to happen in seconds or the stand would tip. the kids were cold and Marse was a trooper but I know the “I love you, lets wrap this shit up” look so it had to happen in one take. The shutter clicked, the wind blew, we smiled and that was it.

We all packed up, headed down the middle of Point Pleasant Park with our dog securely attached to his belt/leash, the girls were still singing, Marse was still smiling and Steph had said, “Yeah Im pretty sure we can do something with it.” Although chaotic, life was perfect.

I saw this photo and I stopped looking at it as a photographer and just looked at it as me. My kids just simply blow my mind. It’s crazy to me that Marse and I made these two little maniacs and we get to watch them grow up and become little women. Time is flying. The last thing I really, clearly remember is Marse going into labour with Lola. The last 3 and half years have been a blur. I’m developing a great appreciation for family portraits, even if they’re not technically perfect. 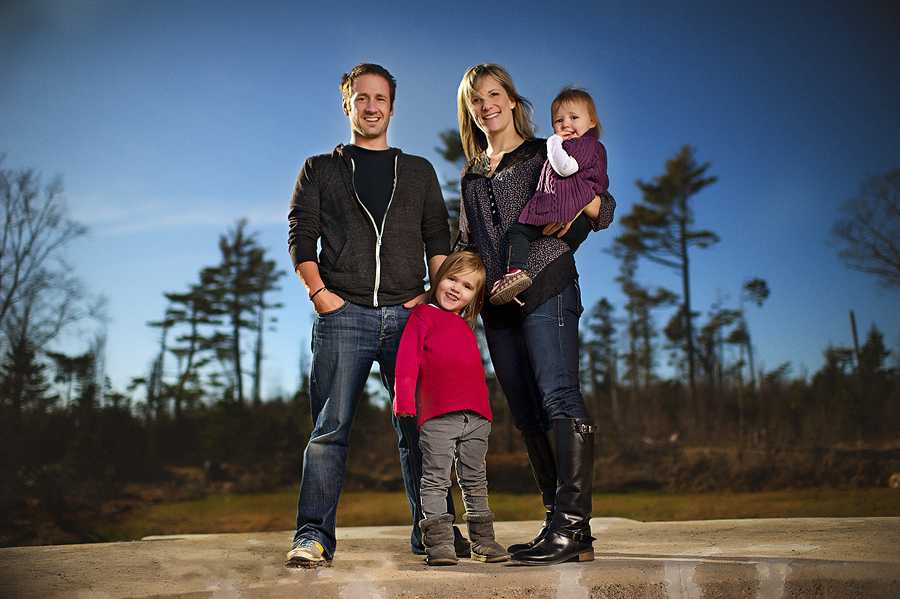 (The photographer side of me is totally taking them all back there again to do it right when its warmer, later, less windy a different location and with an assistant for Steph.)

I wish you would have asked me to go along! I would have been useful in this situation. Mostly I am a Grand Mother and a photog as a bonus! And I love dogs! You even said that Steph could have used an assistant! I could have met Marse and the kids! Enough said, Some day!

It is a wonderful memory you will cherish for a lifetime!

OMG this blog left me in tears!! It’s all my fault…… I ruined poor Eegn 🙁 I am soooooo sorry!! On happier note…… your family is absolutely gorgeous 🙂