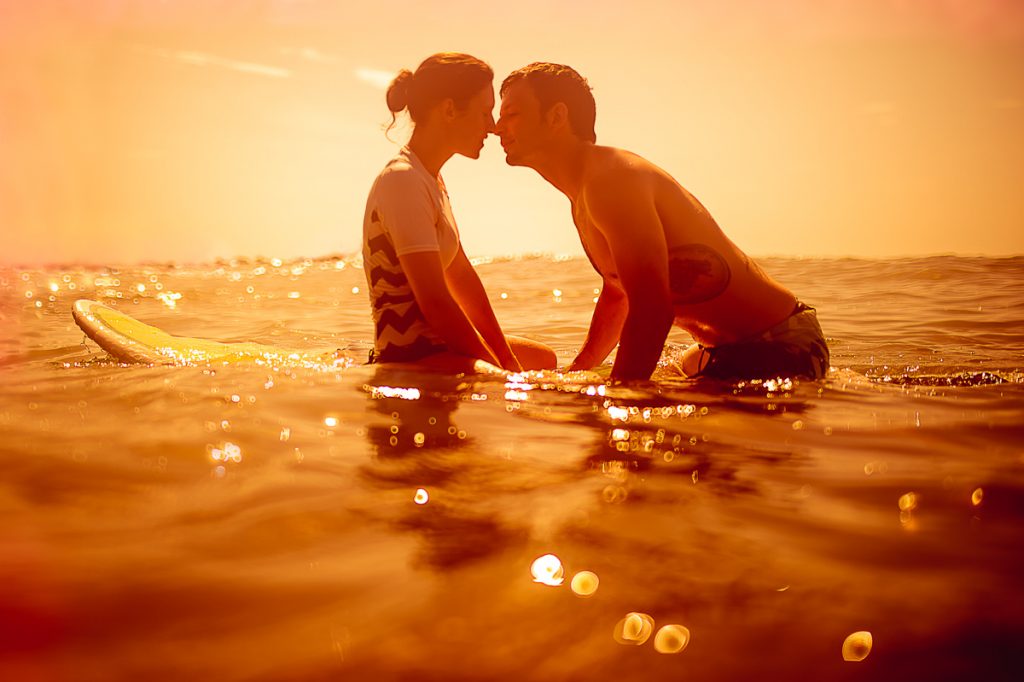 It was a wedding in Costa Rica.

It was the last day, the morning after the wedding and we were pulling out in a few hours but really wanted to try and squeeze in one last shot with Mat + Meghan, a surfer’s shot.

In my head it was going to be simple, they head out on a surf board, hop up on it and do some salt water kissing. We shoot a gorgeous silhouette with rolling ocean and a warm morning sky.

In reality, the sun rose in a spot that we almost had to shoot back at the beach so we had to get deeper than suspected. Also, if you don’t surf much, and I don’t, you won’t know that two people will sink a board so that just their heads stick out of the water…and that makes for a weird photo.

So, Steph is up to her neck in rolling waves with a D4s flailing above her head, Mat + Meghan are trying to stay on a surfboard and make it look hot and I decided that the only way to keep them somewhat above water is to dive under the board and hold them up for a few seconds while Steph shoots. The light wasn’t working in our favour and everything we planned was not happening.

This is another one of those shoots I’ll never forget and, if we’re being totally honest, the final shot was saved by Steph’s genius post production skills…because the story gets worse.

We had just shot the wedding the day before and all the gear was moist, sandy and depleted, so we grabbed one camera (which we have never done before), the d4s, and our trusty little underwater nikon something or other that takes ok pics but really isn’t great. We walk 20 minutes to the beach, we pause for a moment and hope to hell this is going to work, pull out the camera and there it is. The moisture build up that we always caution photographers about when they go away to shoot a wedding on a hot beach. Cold air conditioning + hot summer heat equals condensation. The lense was covered in a fine and unreachable mist that looks like we were shooting through vasoline. Normally it would go away in 10 minutes or so but this hung on and the camera kind of stopped working. It would decide when it would work, not us.

So we’re weeping on the inside but decide to grab a few shots with the nikon coolpix and that was garbage…so we grab Misty, the dew covered D4s. I drive down and push the surf board up, Steph goes by feel for focus and composition and just like the it was over. To this day, I don’t know if Mat + Meghan knew how scared we were this wasn’t going to work, I mean who wants to get up at 6am the morning after their wedding? The answer, is great fucking clients who are willing to try something with us, knowing it could all fall apart and all they got was a few kisses and an early breakfast.

Mat + Meghan, your wedding truly was Pura Vida. I hope you like this shot and if you don’t, we’re definitely willing to go back and try it again!

Officially the hottest surfer wedding photo ever taken, and I don’t care what you shot it on 😉