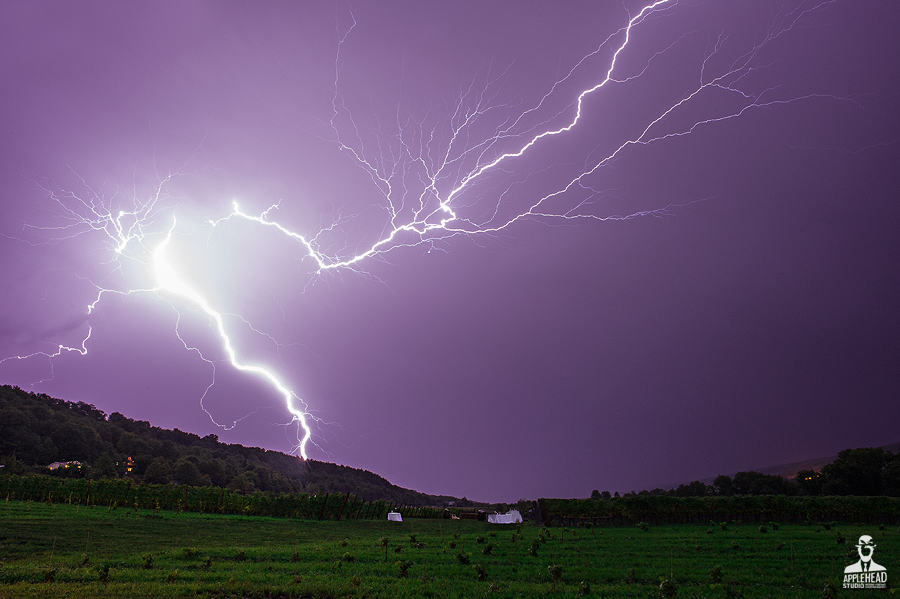 The probability of precipitation was about 30% and the accumulation was 0. 0mm of rain was expected on Saturday.

At 9.09pm the walls of the tent were blowing in and the water was pouring from the sky. Thunder and lightning were striking down over the Benjamin Bridge Vineyard with great vengeance and furious anger. I was certain the power was going to go out or we were all going to be whisked away to Oz in a tornado.

The entire staff of Jane’s on the Common handled it like they work in these kind of conditions all the time. Fire up a second tent here, assembly line some meals here, push the water there…you guys were incredible to watch. Well done.

Devon, Darcy and every single one of their guests just kept on partying. Exactly the way it should have been. Its was great.

The lightning continues to strike all over the vineyard and I just thought there was no way we could not try and capture the sky. I’d never even tried to shoot lighting before but we grabbed an umbrella (metal) and the tripod (also metal) and headed for the middle of the pitch black vineyard.

Pointed the camera in a direction we hoped the lightning would strike and waited…all the while commenting on how ludicrous it was to stand in the middle of a vineyard in a lightning storm.

The sky lights up. We wait. We wait. Exposure finishes…and we blew it. Terrible. No idea how to shoot lighting. I mean, how bright is this unexpected bolt going to be? We made some adjustments, lightning strikes…and other failure. Too dark. 15 minutes later we’re soaked but still alive and about to quit. The sky lights up and we finally got lucky. High fives, chimping and the anticipation of getting it back to the studio to have a look.

I fucking love this job. I love that I don’t have a boss or an HR department that will tell me its too stupid to stand in a field and waste time trying to get a shot that’s probably not going to work anyway. I love that we shoot for clients who give us the freedom to do anything we want.

We’re very proud members of the Fearless Photographers group but more and more I believe it’s the clients who are fearless. Not us.

Family Portraits. Behind the Scenes w the girl in a bag.

The Old Barn and the bride + groom.

absolutely amazing photograph…you guys aced it, and proved that “we can do anything that we are willing to do slowly, over and over again.” And yes, you are totally fearless!!