here’s a funny story for you;

i have these friends, really good friends, the best kind actually. They were there when I was shooting film in the basement w bedsheets and bicycles and they posed for anything i asked them to. i lived w them in my life ‘pre marse’ and they treated me like I was family. seriously. i mean we’re friends and all but i was just included in everything they did…some of it pretty insane.

anyway, now we’re all grown up and try and get together more than we actually do…but in the family there are now 4 awesome kids. Nicole had her heart set on getting a canvas of all 4 kids (ages 5 months to 5 years…i think) and i had just come into the opportunity to shoot on a really cool old couch.

the shoot was madness. total madness. how do you get 4 kids to all look at the camera? luck.

one of these adorable little ankle biters cried the entire time i was in her vicinity…except for this one 200th of a second.

why am i telling you this?

yesterday we had Tanya Shields do some family stuff for marse and lola and i. Tanya & Brian Larter got together to buy both this couch and a chair. The couch ended up in the studio, the chair went to Tanya.

Tanya bought the couch on kijiji. I think it was literally listed as ‘ugly couch’ so whoever was selling this thing had an awesome sense of humor. I found out this morning that Tanya bought the couch from Sue C. who is a client of mine….well, client in the sense that we will someday get her family all in one spot and take some photos. Sue and I are friends on facebook so I figured I’d post this image so she can see what has been going on w her ugly couch. 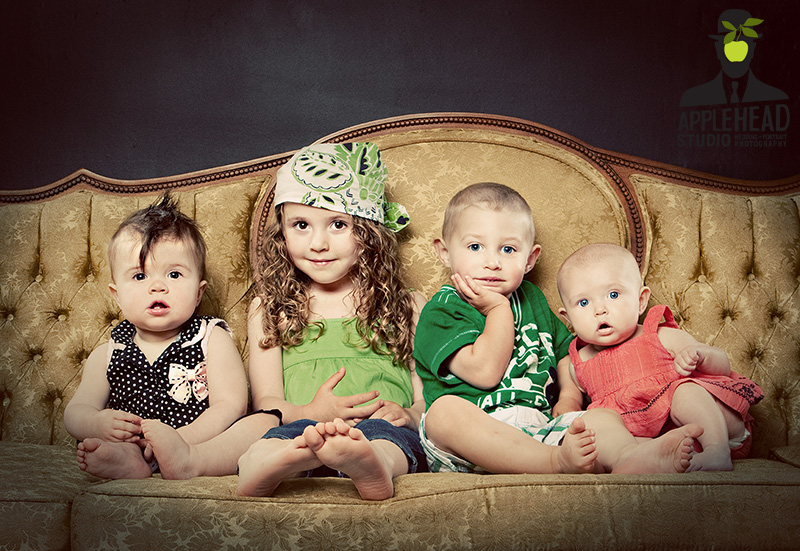 This is a great photo.
While in your studio, I actually thought to myself, “where would he ever get a coach like that.”
Nice story.

Ha Ha! That is fantastic! And, my old “ugly couch” looks amazing 🙂

Liam became a part of my family from the day I meet him and always will be a part of it. We have been through alot together as family haaaa and had some great laughs but he always comes through for us when we need pictures etc…. My mom was stunned by this picture she shed some tears and wished you were there to celebrate with her on her B-day. Thanks for making her day even better!!!!

Love ya
The Delaney’s

Thank you liam sooo very much.Love the little story your are a great friend to us all.