I’m a huge Helmut Newton fan but this same photographer, to others, is absolutely abhorrent. Fortunately,  art is subjective.

We had scheduled a shoot many months ago with Hailey + Chris and had some ideas to work with some powders in the snow. The weather didn’t seem to cooperate so we opted on a spring shoot w coloured powders. Spring weather was no more cooperative than winter.

So at about this point, I had an idea that I wanted to try. We always go into engagment shoots thinking of locations and lighting and different places to go…so I wanted to flip that way of shooting on its head and shoot an entire engagement session with one lens, one focal length and one composition. It left us with nothing but making one frame interesting and moving Hailey + Chris around within that frame. Brilliant.

To add to the idea, I wanted to shoot it as a kind of time lapse. Shoot it from sunset to darkness. Lofty ambitions, but I wanted a final series of 8 to 10 interesting images that show from sun up into darkness.

There was only one place to do it. The Tree. If you’ve ever driven from Halifax to Truro, you know the Tree.

So all we needed was a great clear and sunny evening. We rescheduled one more time but a few weeks ago we all woke up and saw that bright yellow sun in the sky and knew we were shooting.

Steph and I showed up at about 7.30, high fived each other and walked into the waist high corn, down to the Tree.

I didn’t even get 4 corn rows in before I knew that this plan had imploded on itself.

First of all, thats a big fuckin’ tree. It takes a lot of lens to get that whole thing in at the right angle w the sun behind it. I really wish I could show you the images I made in my head. It was a simple game of Near & Far for various shots with an incredible backdrop of a setting sun and a huge tree. That made no sense when you strap on a 24mm lens and tilt it back a wee bit.

HFP #1. The tree was so far away that when you add people to the scene it became a series of Where’s Waldo photography. Tiny little people under a big big tree.

HFP #2. Bringing people closer to the lens just distorted them like Gumby.

HFP #3. The corn, as I mentioned, was waist high. So it became a cruel game of Where’s Waldo’s torso & head.  Tiny little shoulders and heads under a big tree.

HFP #4. All of the above shots are pretty cool on their own…but thats three shots we tested in 5 minutes. I was asking clients to stand in a field until darkness.

HFP #5. Actual darkness takes a long time to happen. I figured it would be dark enough for some cool starry skies over the tree. That actually happened at about 11pm.

So as Steph is crouched over a tripod, swatting away flies, I realized we needed a plan B. Quickly.

We set up a tripod and decided to mark a spot and shoot in that spot every 15 minutes from sunset to darkness. We filled the time in between this set shot with other shots around the field until the mosquitoes got so bad we hid out in the cars and waited for darkness. We made a few shots on the side of the road as transfer trucks rolled by at 120 km/h and trudged back down. Down into the corn and down into the darkness for one last night shot. We decided to let them head home and wait a few more hours for a sky shot full of stars. We went to Dairy Queen to kill some time and at about midnight, back down into the field we went, searching for a black tripod in a dark field.

I missed the focus on the image and is wasn’t useable.

The end result was a small series of images of  varying exposures that I could have done with an aperture in 2 minutes.

Nothing worked. Not one thing. I failed. There was no final series of images in one composition with a brilliant sunset behind a beautiful tree. 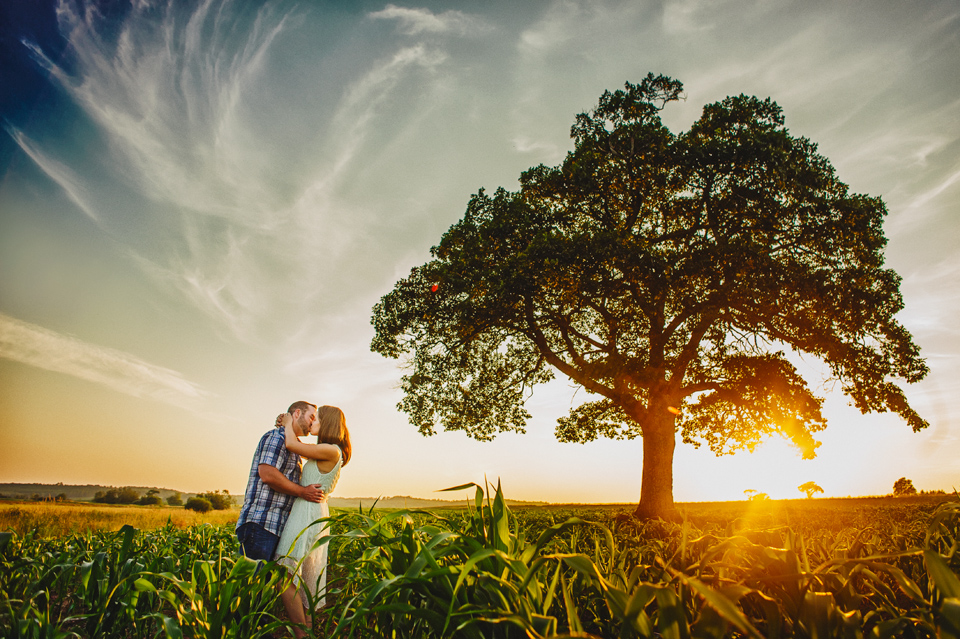 Hailey + Chris, I know I’ve told you this as the mosquitoes pierced your skin and the corn stalks slapped you in the dark, but Thank You so much for putting up with us. Your high tolerance for pain in pursuit of fun is inspiring. Thanks for hanging out with us in a dark field.